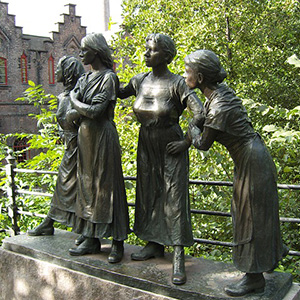 Breathtaking scenery, the Arctic Circle, train rides, cruises, vibrant cities, and so much more await you on this marvelous Scandinavia and Russia tour. Scenic highlights include an, overnight cruise from Copenhagen to Oslo in first-class, outside, two-berth cabins with private facilities and dinner included; a train ride between Oslo and Bergen, considered to be one of the world’s most scenic rail routes; a ferry ride from Sweden to Denmark; a ride on the high-speed Sapsan train in Russia; and a spectacular ride on the Flåm train with some of Norway’s most magnificent scenery, including Kjosfossen waterfall, with its water cascading down the mountainside-a special experience offered by Globus.Spend time in the Arctic Circle-land of the “Midnight Sun”-and visit the North Cape Visitor Center, marking the endpoint of the European mainland. Here, stand at the sheer cliff rising 1,000 feet from the Atlantic Ocean and feel like you’re at the end of the world. In the Arctic Circle, also enjoy ferry crossings on Ullsfjord and Lyngenfjord, which offer breathtaking views of the Lyngen Alps with their blue glaciers and mountain peaks rising more than 3,280 feet directly from the fjord. Visit Alta’s rock carvings, a UNESCO World Heritage Site which demonstrates a human settlement dating from 4,200 to 500 BC. Admire crystal-clear streams, sparkling lakes, tundra, and forests as you head south to Finland’s Lapland and cross back over the Arctic Circle. Out-of-the-ordinary experiences offered by Globus are highlight visits to the Santa Claus Village, where you receive your Arctic Circle Certificate, and to a Husky Farm. Your flights from Oslo to Tromsø and from Rovaniemi to Helsinki are included, and three nights in Helsinki allow the opportunity to join an optional excursion to Tallinn, Estonia.In Russia, visit St. Petersburg’s world-famous Hermitage Museum and enjoy a specialty dinner; and Moscow’s Red Square and the Kremlin, plus the Cathedral of Christ The Saviour, and the Novodevichy (New Maiden) Convent! On this Scandinavia and Russia tour, spend time in the cities and enjoy guided sightseeing in Stockholm, Copenhagen, Bergen, Oslo, Helsinki, St. Petersburg, and Moscow. All of this-and much more-are included on this spectacular once-in-a-lifetime vacation!

You can thank Olav Kyrre.

He’s the Viking king who founded Bergen in 1070. During the Middle Ages, the city became Scandinavia’s primary port, and today, against all odds, you can still see buildings and other relics of this long period. There’s the medieval fortress of Bergenhus, as well as the summer home of composer Edvard Grieg. Bergen, Norway is also a jumping off point for excursions to some of Norway’s wonders, such as Sorfjord, Samnangerfjord, Tokagjel Gorge and Steindalsfjoss Waterfall. After you’ve visited all of these, there will be a short spelling quiz.

Graceful design, imaginative architecture the Finns have long been admired for their beautiful buildings, gardens and parks. You’ll enjoy visiting them too, as you pass all styles of centuries past and present, from medieval to neoclassical, as well as the superb ultramodern creations by Aalto, Saarinen, and other Finnish masters.

Situated at the head of a 60-mile fjord, Oslo, Norway, one of the oldest of the Scandinavian capitals, is beautifully framed by a vast expanse of woods, moors and lakeland. A blend of 19th- and 20th-century architectural styles, Norway’s capital is known for the wood carvings and colorful frescoes that decorate its buildings and public spaces.

Rovaniemi is located at the Arctic Circle. And sometimes called “The second capital of Finland”. It is a service centre of education, commerce and administration. We have the most northern university in EU, with four faculties. And the multi-interdisciplinary institution of Rovaniemi polytechnic, which can offer wide variety of degree programmes. Rovaniemi is a town of absolute seasons of the year. In the northern Finland you can enjoy real winter and nightless nights in
summer.

Wasn’t Leningrad here a minute ago? Maybe a few years ago, but since the fall of Communism this shining jewel of a city has reverted to its original name, St. Petersburg, named for Peter the Great, who built it as a fortress in 1703.

Elegant facades, glorious cathedrals and grand residences were built along the city’s canals. Construction flourished under Catherine the Great, and the city gained new splendor with elaborate palaces, lovely parks and magnificent squares designed by French and Italian architects. St. Petersburg is the most European city in Russia, and the most
spectacular.

Founded as a fortress in the 13th century, Stockholm eventually grew to become the capital of Sweden. It is a city of remarkable beauty with numerous parks, tree-lined squares and boulevards, and pleasant water vistas. To grasp the full character of Stockholm, visitors must hop from island to island, each of which boasts its own personality. Sergels Torg, a central square located in Norrmalm, serves as the focal point for modern Stockholm. On Helgeans Holmen, the tiny island
immediately south of Norrmalm, sits the Riksdagshuset (Parliament Building), followed by the medieval Gamla Stan (Old Town) island and then the large Sodermalm, a bohemian enclave in a former blue-collar quarter.

Across the Strommen (the Current) lie the two scenic islands of Skeppsholmen and Kastell-Holmen. Farther east, Djurgarden Island houses a number of city museums and connects to the northern Ostermalm, a pricey residential neighborhood that adjoins Norrmalm sprawling across 14 islands, the Swedish capital has always enjoyed an ideal
commercial location at the confluence of Lake Malaren and the Baltic Sea. As a result, a forest of high-rise office buildings and condominiums has grown up beside the medieval castles that once guarded Sweden’s strategic waterways. Founded in the mid-13th century, this former outpost developed into a vibrant capital in the 17th century, when landscapers and architects began to build elegant parks and squares that rivaled those in the finest European cities.

Today, picturesque Stockholm boasts a stunning combination of man-made gardens in its center and natural scenery on its outskirts, where sun-lit lakes shimmer in the pine-clad countryside.

Prices are per person, land or cruise only, based on double occupancy. Offer subject to availability and change without notice. Some restrictions may apply. Please ask us for details.

Charges not included in the land vacation price: airfare to and from the start of your vacation; airline baggage fees including checked and/or excess baggage fees; Federal inspection fees for the Federal U.S. Customs and Immigrations; agricultural tax; other per person taxes imposed by government entities; applicable cruise taxes, fees, fares and port charges; passports; visas and vaccinations; transfers; tips to your Tour or Cruise Director, Local Host, driver, Local Guides, and/or ships’ crew; gratuities on ferries, trains, and cruise ships; laundry; telephone; minibar; alcohol, beverages, and food outside of the contracted menu as presented at a hotel or restaurant (these extra items will be billed to you before leaving the hotel, ship, or restaurant); additional excursions and activities not listed as ‘included’ in the itinerary; porterage at airports or train stations; Travel Protection premiums; and all other items of a personal nature.

Click on the buttons below to request a quote on this deal or contact us directly with further questions or comments.

Request A Quote Send To A Friend Have A Question? Contact Us

Send To A Friend

Please don't close or refresh the page while we are processing your submission
Please be patient, this could take a few minutes.